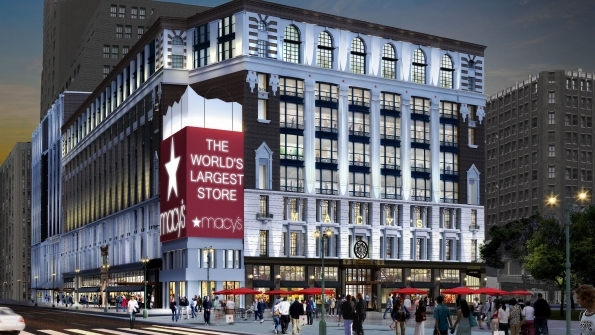 The most wonderful time of the year wasn’t all that wonderful for Macy’s Inc. The department store chain saw its same-store sales fall 4.7 percent in November and December.

Shortly after announcing its disappointing holiday results, Macy’s issued an announcement outlining its strategic plans to cut costs and possibly monetize its real estate. The retailer operates about 900 stores in 45 states, the District of Columbia, Guam and Puerto Rico.

“In light of our disappointing 2015 sales and earnings performance, we are making adjustments to become more efficient and productive in our operations,” said Macy’s Chairman and CEO Terry J. Lundgren in a statement. “Moreover, we believe we can operate more effectively with an organization that is flatter and more agile so we can pursue growth and regain market share in our core Macy’s and Bloomingdale’s omnichannel businesses faster and with more intensity.”

One of Macy’s shareholders, activist investor Starboard Value LP, has been particularly vocal about its desire for Macy’s to unlock the “enormous intrinsic value” of its real estate portfolio. Earlier this week, the company’s managing member Jeffrey C. Smith delivered a letter to Lundgren and released presentation materials that outlined Starboard’s proposed strategy and structures.

In Smith’s letter, he wrote: “We are pleased that management and the board of directors recognize that Macy’s owned real estate has substantial value. The recent announcement that Macy’s is moving forward with pursuing joint venture structures for both its mall-based and iconic properties is a good decision for the Company and its shareholders.”

Starboard contends that Macy’s has the largest and most valuable real estate portfolio in the department store space. Wall Street seems to agree. In a recent research note from Nomura Securities, the firm wrote: “We highlight our view that Macy’s real estate offers tremendous valuation, regardless of when and/or how it is monetized.”
Closing stores

Macy’s initially indicated it was investigating options regarding its real estate in mid-November. It recently provided updates that it has hired Eastdil Secured to approach potential interested parties, with assistance from Credit Suisse and Goldman Sachs, regarding forming partnerships or joint ventures for the company’s mall-based properties, as well as Macy’s flagship real estate assets in New York City, San Francisco, Chicago and Minneapolis.

New York City-based real estate firm Tishman Speyer has expressed interest in pursuing partnerships on the four flagship locations, and therefore will not be advising the company on those properties. Tishman Speyer will, however, continue to advise Macy’s on potential opportunities for maximizing the value of other real estate in its portfolio.

In addition, Macy’s is on the hunt for a real estate executive to lead its joint venture and partnership initiatives.

Many retail and real estate experts believe Macy’s should follow in the footsteps of other retailers like Sears and Hudson Bay Co., which have created joint ventures with REITs. Earlier this year, for example, Sears Holdings Corp. formed joint ventures with Simon Property Group and General Growth Properties that gives the REITs the ability to redevelop Sears’ spaces. Separately, the retailer spun off its best properties into a REIT called Seritage Growth Properties and plans to lease back the stores from Seritage.

Starboard says it’s “most logical” for Macy’s to immediately separate its iconic stores and the substantial majority of its mall stores into two separate JVs, which have an estimated combined value of $16.5 billion. The most iconic and valuable is Macy’s Herald Square, a historic landmark in Manhattan valued at nearly $4 billion.

Starboard suggests that Macy’s could partner with different parties for each JV, maximizing the value of each JV, as certain parties may be willing to pay more for iconic urban properties versus mall stores, or vice versa.

“By following this plan, we believe Macy’s has the opportunity to create significant value for shareholders and massively improve its share price to approximately $70 per share (before value creation from further improved operations and credit card earnings), while maintaining its cash flow and real estate flexibility and reducing risk,” Starboard wrote in its presentation materials. “With the real estate market near all-time highs, now is the time to separate Macy’s real estate assets and create value for shareholders.”

Starboard speculates that separating the real estate portfolio could create $10 billion of shareholder value. It believes Macy’s would be worth approximately $70 per share if it created two JVs. Currently, the retailer’s stock is trading at a little less than $38.

However, REITs would only be interested in doing JVs that would give them a clear path to owning the real estate outright according to Alexander Goldfarb, a REIT analyst with Sandler O’Neill + Partners. “REITs aren’t in the business of owning low-yield assets with no real ability to do anything else with it to create value,” he says.

At the same time, Goldfarb has no doubt that there are plenty of investors outside of REITs that would love to get their hands on Macy’s real estate. “If I were a foreign investor, for example, and I could own a piece of an iconic property and generate a yield that exceeds a 10-year Treasury, why wouldn’t I want to do that?”

There’s recent evidence that Starboard’s suggestions have merit. In November 2015,